Announcing the Release of Coalescence out October 28 2013!! 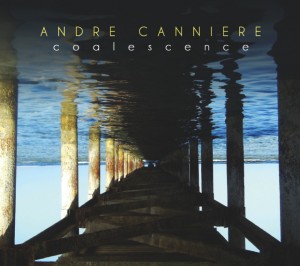 from trumpeter and composer Andre Canniere

“One of the great challenges in composing instrumental music is finding ways to connect to a specific subject or concept, much like you would with a song containing lyrics.”
-Andre Canniere

Coalescence (defined as “the union of diverse things into one body or form”) is the latest solo album from the highly gifted trumpeter, composer & bandleader Andre Canniere, an American who’s currently based in London. This album is Canniere’s second release for WWR and follows his critically acclaimed Forward Space, which received no less than a 5-star review from The Guardian in 2012 as well as being called “one of the best recordings in a long time” by Jazzwise Magazine.

Coalescence builds greatly from its predecessor and gleams with originality from the first note, further demonstrating Canniere’s composing prowess as one of the premier writers of his generation, and one who completely bashes aside any concern with genre limitations while fusing an enormous musical palette into a unified and inspired statement. Canniere has also employed his regular band on the recording (pianist Ivo Neame, guitarist Hannes Reipler, bassist Ryan Trebilcock and drummer Jon Scott) and the result of their touring over the past year is clearly evident, as they have developed into one of the premier ensembles working at the forefront of improvised instrumental music in the UK.

What’s more is that Canniere is as skilled on trumpet as he is as a composer. Listen in as he expertly changes tones, timbres and attack on his chosen instrument at the blink of an eye, evoking different emotions and directions within the music, just as his compositions sometimes change unexpectedly from section to section, while never losing focus; he’s truly a craftsmen at work who’s developing an exciting and singular vision of music.

And look out for Andre’s UK tour in support of the release with a CD Launch party at our inaugural Whirlwind Festival at Kings Place on OCT 12. Click here for tickets.