I’m very excited to announce that the Andre Canniere Group’s UK debut Forward Space is officially released on Whirlwind Recordings today! It is available to purchase directly from the Whirlwind site as well as a number of other music retailers including Amazon UK, Amazon USA and HMV.

Here’s some of the press it has received so far…

“It says much of London’s Jazz scene that players like US ex-pat Andre Canniere are choosing to make the Capital their home. On his UK debut the trumpeter, who earned his chops amid New York’s famed Downtown scene, employs intuitive improvisational skills and a compositional depth that’s become characteristic of the many varied bands and musicians responsible for UK Jazz’s international recognition.”
Mercury Prize

“Insanely Infectious…An intelligent and stimulating amalgam of jazz and rock elements. For all their jazz sophistication Canniere’s tunes often have a song like structure and flair for melody”
The Jazz Mann

“An impressive debut from a technically assured, highly individual soloist and a gifted composer.”
London Jazz

“The trumpet/guitar timbral contrast is used most effectively, and the writing is rich, making this very much a group session rather than leaving lots of room for conventional soloing against a holding rhythm section”
Jazz Breakfast 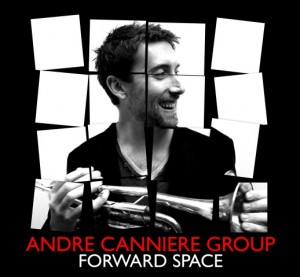 If you’re in the London area we will be holding the album launch at The Vortex next Tuesday, 31st January. RSVP here. Following that will be a short UK tour to promote the album. Dates as follows:

Comments are closed, but trackbacks and pingbacks are open.