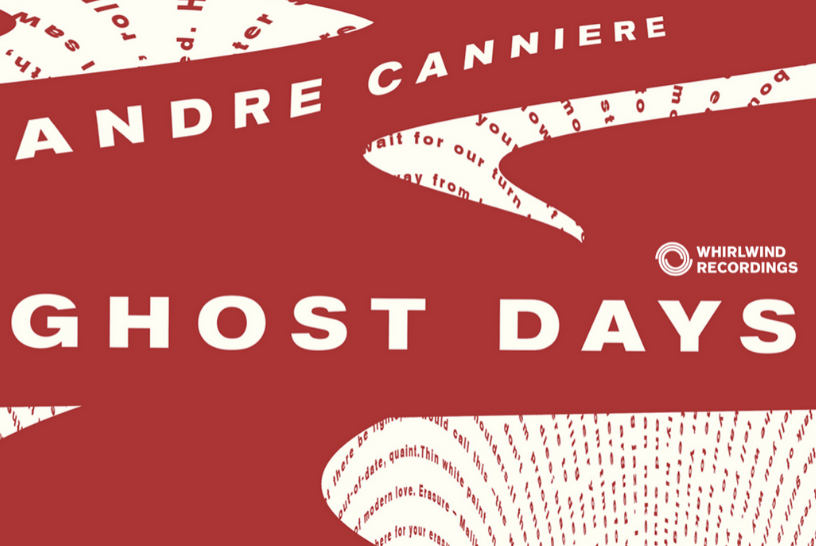 “The songs deal with loss, anxiety and disappointment, yet are often uplifting in nature with a quirky sense of humour and an imaginative and hopeful message that works its way effortlessly through the music.”
★★★★ UK Vibe (full review)

The US-born, London-based trumpeter and composer Andre Canniere is set to follow up his acclaimed The Darkening Blue with a new release on Whirlwind. Entitled Ghost Days, it reunites him with singer Brigitte Beraha and saxophonist Tori Freestone, and introduces a new, all-star UK rhythm team of Rick Simpson (piano) Tom Farmer (bass) and Andrew Bain (drums).

Six of the album’s seven original compositions were inspired by a unique collaboration between Andre and the poets/writers Malika Booker and Rebecca Lynch. Each piece had a poem as its starting point, defining the overall mood and the rhythm and phrasing of the melody, and the emotional message of the lyrics is beautifully delivered by Beraha to create a unity of atmosphere throughout the album. The songs deal with loss, anxiety and disappointment, but are leavened with humour and a powerful sense of hope that reaches its climax in the final instrumental track, ‘Endure’.

A Pennsylvania native, Andre first developed his career in New York where he worked with artists such as Maria Schneider, Becca Stevens, Donny McCaslin, Kate McGarry, Ingrid Jensen and Darcy James Argue, and this album is full of the kind of innovative cross-genre exploration for which those artists are renowned. ‘Suicides’ matches a lyric by Malika Booker (actually about ladybirds!) with a powerful funk inspired groove and some hot blowing from Bain and the horns. ‘Colours’ uses Lynch’s poem to create a punchy piece of jazz-inflected post-rock that recalls Radiohead as much as Miles Davis. The mood is both sombre and uplifting, and this carries over into ‘Erasure’, where Canniere took the rhythm of the first line of Booker’s extended poem about loss and used it to create the main melody. Beraha then develops it into an astonishing improvisation that builds and builds in intensity, switching from fragments of lyrics into pure wordless extemporisation over a driving rock beat. ‘My Star’ has the hushed, relaxed simplicity of a Norah Jones tune, until it opens out into a pair of truly breathtaking solos from Canniere and Simpson. “It’s almost like a pop tune – but I really liked the way Rick plays on this, so I shortened the form a bit so he could take a solo too!” ‘The Arrival’ takes a tale of an expectant father as an extended metaphor for the anxiousness attending the birth of any creative project, with Malika’s lyrics evoking the image of a trumpet player, though it’s Freestone who takes the lead with a powerfully charged solo. ‘One More Down’ matches Lynch’s evocative lyric about a missing person with Canniere’s exploration of negative harmony concepts over which Simpson creates a dazzling solo statement as Farmer and Bain lock into a precision groove.

All the vocal-based material was toured by the band extensively before they went into the studio: the sureness with which they deliver the arrangements is testament to how thoroughly each musician assimilated the concept. Canniere’s ears are open to influences from across the musical spectrum, but he insists that he sees this music as jazz, informed by the language of his primary inspirations Miles and Freddie Hubbard as much as by the sounds he’s absorbed from rock and pop. For the last track, however, Canniere wanted to try something different: an exercise in classic-era jazz spontaneity, with the arrangement brought fresh into the studio and recorded in a single take. The message is intended as a political statement – “The reason I called it ‘Endure’ is because that’s what we’re doing now – enduring and hoping something better will come – something is around the corner that will change things”.