The dust seems to have settled after another epic EFG London Jazz Festival. Ian at The Jazz Mann was very gracious to publish this wonderful review of our gig:

It was the same line up that I’d seen at Charlie Wright’s a couple of years ago opposite Riepler’s own band as part of the 2012 LJF. However I felt today’s gig was better, a combination of the intimacy of the venue and the fact that the musicians have continued to mature both individually and collectively in the intervening period.

Canniere has released two acclaimed albums on the Whirlwind Recordings label, “Forward Space” (2012) and “Coalescence” (2013). Both recordings were represented today as the quintet began their first set with the hard driving “Lost In Translation” from “Forward Space”. Like myself Canniere came to jazz from a sideways direction having started out as a rock music fan and there are still strong elements of this in his writing which ensures that his music sounds very contemporary. Guitarist Riepler played an important role here as he shared soloing duties with the leader.

From “Coalescence” came “Gibbs And East”, Canniere’s homage to the city of Rochester, NY with features for Trebilcock, Neame and Canniere himself.

Canniere’s writing is often influenced by political events. The sombre “Gaslands” is his protest against the effects of fracking in his home state and featured thoughtful solos from both Neame and the composer.

The title track from “Forward Space” represented a return to the powerful, fusion-esque style of the set opener with features for Riepler on guitar and the propulsive Scott at the drums.

Also from “Forward Space” came “Crunch”, a similarly forceful tune written in response to the financial crisis of 2008. With solos from Canniere and Riepler this brought the curtain down on a predominately energetic first half.

From “Coalescence” the composition “Point Zero”, Canniere’s protest against the laxity of American gun laws, began the second half with the composer’s unrest being expressed via his trumpet and Riepler’s guitar.

Although as yet unrecorded the tune “Realising” dates back to Canniere’s music college days. This proved to be a thoughtful, ballad like piece with Scott frequently deploying brushes and with solos from Neame and Riepler.

“Accelerated Decrepitude” appeared on a 2006 recording, “As of Yet”, made in New York with American musicians. The tune title comes from a phrase used in the dystopian film “Blade Runner”. Elements of this crept into the music but Canniere’s writing is intrinsically melodic and rarely wilfully “difficult”. Solos here from the composer on trumpet and Neame at the piano.

The ballad “Where We Grew Up”, another yet to be recoded item featured Canniere’s mournful trumpet above Scott’s mallet rumbles followed by Neame’s lyrical piano. As Scott switched to sticks Canniere’s playing became more anthemic, his soaring trumpet melodies doubled by Riepler on guitar.

I remember being disappointed at Charlie Wright’s by the fact that Canniere elected not to play “Cure” from “Forward Space” and I was delighted that he chose the piece to conclude his performance with it today. Written to describe the energy and urgency of living in New York City the tune has a killer riff and proved to be the jumping off point for bravura solos from Neame, Canniere and Riepler, the guitarist crouching to manipulate his sound via a range of floor mounted gizmos. An urgent dialogue between Neame and Scott mutated into a full blown drum solo as Canniere and his colleagues ended their lunchtime performance with a bang.

This was a great start to a very enjoyable few days at the Pizza Express. Both of Canniere’s most recent albums have been reviewed elsewhere on The Jazzmann and both are highly recommended, particularly the excellent “Forward Space”. “ 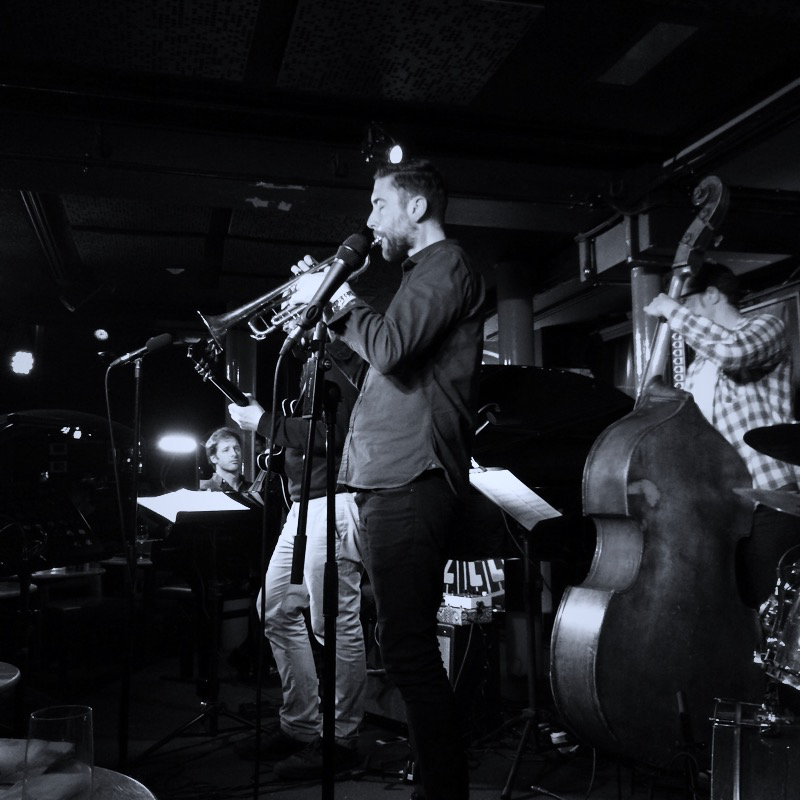