It’s time for a long overdue update! Firstly I’d like to thank everyone for buying and listening to Coalescence since the release last month! The album tour was a blast and it was great to present some new music across the UK to some very friendly and receptive audiences.

We kicked off the tour in style with the official launch and a packed house at the marvelous Kings Place, Hall One. The performance was reviewed (and sketched!) by Alban Low at The Art of Jazz:

A cocktail of fate and a heavy work load means I’m fortunate enough to be writing this on the day of Andre Canniere’s latest CD release “Coalescence”. It was just over 2 weeks ago (12/10/2013) that we heard him launch his latest offering at the cutting-edge Whirlwind Festival. This was a concert of the highest standing, especially in Whirlwind record boss Michael Janisch’s eyes, for Canniere and his band occupied the penultimate berth of the 3 day festival journey.

There are those personas that you instantly feel an affiliation to, and Andre Canniere is one of these. What he lacks in razzledazzle he makes up for in thoughtfulness, and with a lanky elegance he is The Thin Man rather than a Sam Spade in demeanour. There is a wholesome louchness if that makes sense, like a modern day Dashiell Hammett antihero who is a determined trawler of society’s trashcan, unearthing the evidence of venal weaknesses. I do not know whether he is a champion of the underdog but I suspect he could rally us mongrels with his depth of song and mind.

Like a card player Canniere laid the album before us in a rising straight, “Sweden Hill” ascended slowly but accelerated along the fast switchbacks on trumpet. He won another hand with a flair of hip Hispania on “Gibbs and East” and finished by playing a supporting role on “Nylon” in clustering statics. Here he was joined by the bootleg guitar of Hannes Riepler, in hindsight, a warm up for the later “Point Zero” where Riepler was absolutely outstanding. Representing the sexy allure of the gun, the desire for control and power that is the ‘high’ of the firearm. If this protest song has the Newtown shootings at its heart, then the guitar was its flexing muscle and the trumpet our conscience.

Ivo Neame held the placard high with an absorbing contribution on the fourth tune ‘Gaslands’, where Canniere’s block capital letters were written in a 12 inch font, shouting ‘NO TO FRACKING’. Neame’s language was not a yell in contrast, his protest was longing and lost which created a wandering, powerful sentiment.

It is the measure of the group that on this occasion the drumming member of Day 2’s Whirlwind Supergroup, Dave Hamblett’ was relegated to modest displays of valour, dowsing mere burning buildings rather than saving the world from certain destruction.

Andre Canniere is a valuable addition to our music scene here, our Thin Man has sprouted new shoots beside The Thames far from his American roots. Hopefully he will be here for years to come and swapping “Sweden Hill” for our more modest Richmond variety.

Check out “Coalescence” at Whirlwind HQ. 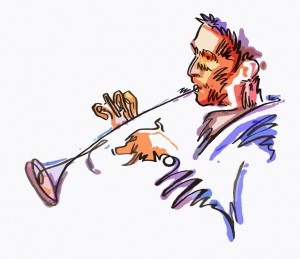 Go have a look at the rest of his fantastic sketches at The Art of Jazz.

Next on the tour was Dempseys in Cardiff with the wonderfully talented Esben Tjalve making his debut dep appearance with the band and what a splendid job he did! Thanks to all who came out and to Alistair and co for creating such a lovely and welcoming experience.

Liverpool has always been one of my favorite UK cities, possibly drawn from my early days as a Beatles fanatic but I also love that it reminds me of New York City’s seaport area. Every time I visit I make a point of going for a run along the Albert Docks and taking in the wondrous Mersey River. It was great to see ParrJazz doing so well (with an impressive makeover) and great to play to such a large and friendly crowd so far from home!  Also, special thanks to the incredible Nomfusi for sitting in at the end of the night – what a voice!

It was great to bring the band to Sheffield for the first time. The Lescar is a lovely venue which based on the size and mood of the crowd, is in truly good hands and I shall look forward to coming back soon (thanks Jez and co!).

The final date was in Oxford at The Spin (on Halloween of all nights) and it was an especially good night and great way to end the tour. Thanks to Pete and Mark – always a pleasure!

Next update – look forward to some album reviews and new dates coming soon.