acanniere / November 26, 2016 / Comments Off on Guardian Review + JazzViews Album of the Week / News

Reviews are still coming in for The Darkening Blue – the latest from John Fordham in The Guardian:

“Another ambitious step for the unpredictable, London-based, Pennsylvania-raised trumpeter Andre Canniere and a very classy sextet, including Phronesis and Marius Neset pianist Ivo Neame, excellent saxophonist Tori Freestone and resourceful singer Brigitte Beraha, wrapping contemporary jazz settings around the poems of Rainer Maria Rilke. Canniere’s range-spanning trumpet and bright runs, and Freestone’s sensitivity to spacing and dramatic narrative accompany Beraha’s impassive eloquence with the lyrics of Rilke’s Autumn Day and Going Blind. The singer’s delicacy in the quiet handling of Evening (Rilke’s line translated as: “The sky puts on the darkening blue coat” provided the album title) is hypnotic. Canniere’s instrumentals, like the melodically slippery Splash, the deep slow-burner Area of Pause, and the heavy-hitting, Bitches Brew-like Hug the Dark confirm his jazz-composing power and constructive writing for improvisers. The band is terrific – even if some of Rilke’s texts seem to fight back pretty hard against being turned into song.” 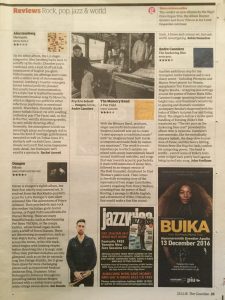 Another from JazzViews who have also named The Darkening Blue as their Album of the Week.

“Jazz and beatnik writers have a long history of collaboration, and several attempts have been made to marry jazz with lyric poetry, but this project goes a step further, presenting us with music inspired by of the unlikely pairing of fin-de-siecle aesthete Rainer Maria Rilke and riotous boozehound Charles Bukowski. In practice, this works a lot better than might be expected – Rilke’s poems, in translation by Stephen Mitchell, use a direct and uncomplicated language that suits the transition to sung lyrics; while the Bukowski parts eschew his more lurid confessions in favour of an interpretation of ‘Bluebird’ written by Cainniere’s sister Monique – Bukowski’s estate weren’t forthcoming with permission to use the original, which is a shame, as this powerful, well-though out music would surely have done it justice.

Only half the tracks have vocals on; Brigitte Beraha’s voice is cooly evocative, perfectly pitched and refreshingly free of the mannerisms and melismatic excursions that impede the communication of many a jazz lyric. Her careful but committed phrasing delivers Rilke’s lines with the respect they deserve. “Autumn Day” strikes just the right note of wistfully melodic seasonal mistiness, and Tori Freestone is exactly the right player for this project, able to move seamlessly from plaintive melody to contemporary chromaticism. Ivo Neame’s overdubbed accordion combines with his lyrical piano to underscore the mix of direct accessibility and modern jazz sophistication. Throughout, Canniere’s playing is high and clear, his tone crisp and flawless, and the support from Janisch and the excellent Ted Poor is as inventive, subtle and powerful as you’d expect. Canniere has spoken of his love of american indie-rock acts like Bon Iver – it seem an unlikely reference, but in fact this album has a flavour of that artists’ minor-key euphoric melancholy, especially when Canniere and Freestone combine under Beraha’s voice over gently ascending chord patterns. “Bluebird” (the Bukowski one) is closer to post-bop swing; “Splash” uses a tricky 13-beat pattern and open-sounding, uplifting harmony to move us towards Christian Scott territory; “Area Of Pause” starts as a sombre ballad with a chilly Nordic (or North American) feel, before unexpectedly picking up into something approaching jazz-funk, with some great, fearlessly exploratory rhodes work from Neame; “Hug The Dark” is a more abrasive abstract funk, but ‘Lament” restores the folksy, contemplative mood and “Sunflower” is an evocative closer. This is sophisticated yet accessible music, immaculately performed by a crack band of highly compatible musicians, which manages to sustain it’s intellectual ambitions very convincingly.”